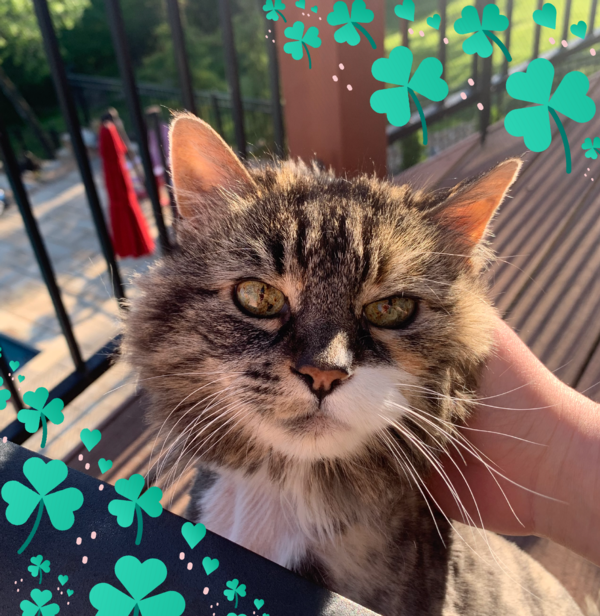 Pets are loyal, loving, hilarious, and can provide endless happiness to our lives. They certainly have a knack for warming our hearts. We can never say enough good things about our pets. Since luck is the much-celebrated theme of March, we are sharing some special stories. Enjoy reading about how these lucky pets have overcome their struggles and enhanced the lives of the staff at Galloway Village Veterinary! 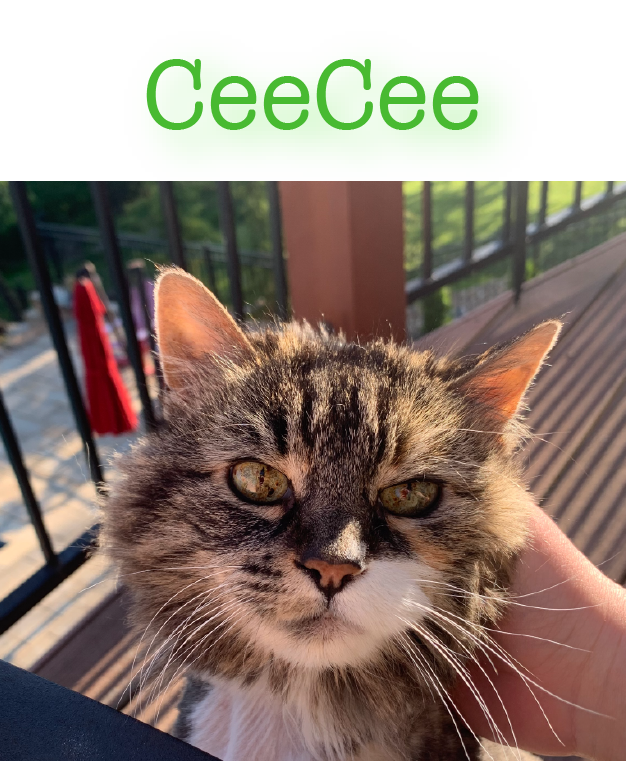 "Meet CeeCee, a 14-year-old Domestic Long-hair cat! CeeCee has quite the story. She was found as a kitten in the middle of the road with broken back legs. I took her to the vet to get her checked out and help her make a full recovery. It took about six weeks with both legs in casts until she was able to heal from her injuries! After that, she was doing great! In 2020, CeeCee suffered from intervertebral disc disease, which caused paralysis throughout her body. She could not walk and could barely lift her head. After a few weeks of treatments and rest, she has almost made a full recovery and is back to her sweet, loving self! 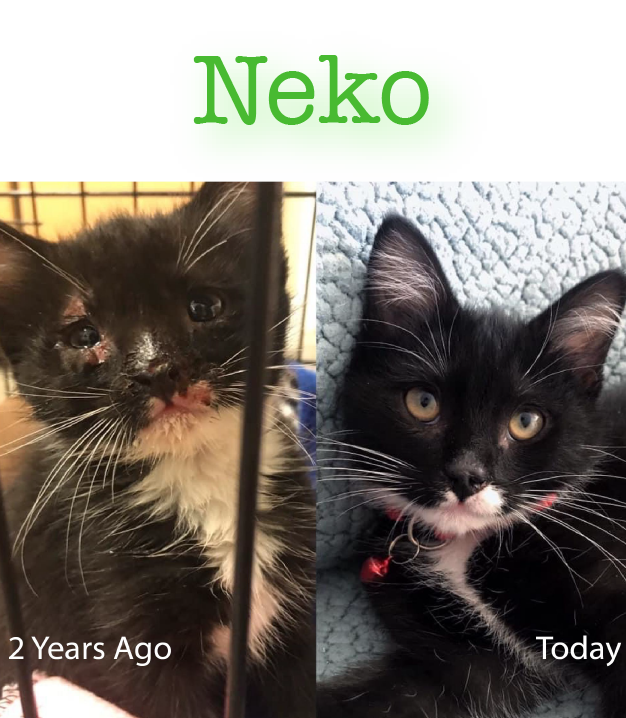 “This is Neko! He was turned into the animal rescue I worked at after someone saw a person throw him out of a moving car. Luckily, he didn’t have any broken bones and only had injuries to his face. When I first saw his little face, I knew I had to foster him. Through his healing journey, he ended up losing his nose. We were very lucky that it grew back in time and he didn’t lose his sense of smell. He was such a trusting and confident little guy. He loved all of our other pets but most of all he loved our cat, Milo. Milo took him under his wing and taught him how to be a cat. He would play with him and clean him when he got dirty. After about 5 weeks of fostering him, we finally got him healthy enough to be adopted but seeing his bond with Milo we couldn’t let him go. It’s been 2 years and he is the best cat we could’ve asked for. He loves to sleep under the covers all day and play all night. He is truly spoiled!” 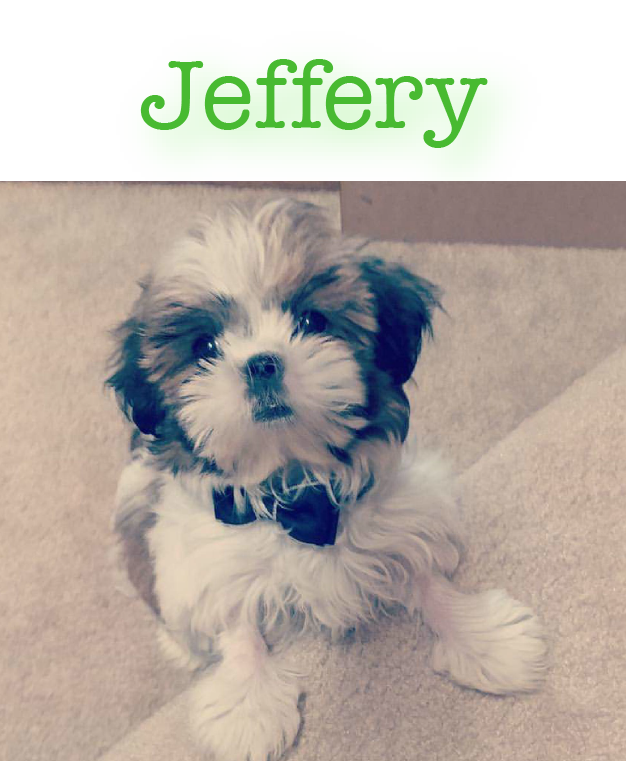 “Meet Jeffery! Jeffery was just 2 months old and did not even weigh a pound when he was diagnosed with parvo.  His blood sugar was so low it wouldn't even read.  Unfortunately, his owner could not provide the intense care he needed, so she made the selfless decision to sign him over to me.  Due to his size, I knew the chances of him surviving were slim, but I had to try. Jeffrey was hospitalized for a week and then I was able to take him home. I then spent another week syringe feeding him every 2 hours. Today Jeffery is 3 years old and acts like a normal dog.  He is the most gentle and playful little guy. People say he's lucky, but I think I'm even luckier!” 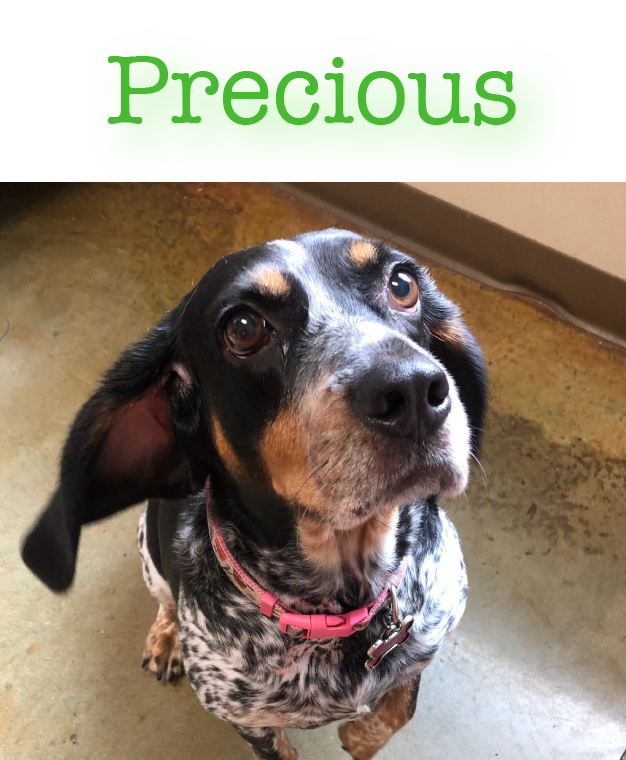 “This is Precious, a 9-year-old beagle/bluetick coonhound mix. She was rescued almost 2 years ago after living on a chain her whole life. When she first came to GVV, she had multiple intestinal parasites and tested positive for heartworm disease. Heartworms are spread through the bite of an infected mosquito and can cause permanent damage to the heart, lungs, and liver if not caught early. Precious went through months of treatment and strict cage rest to keep her safe while the medications were killing the worms. Now, Precious is doing great! The treatment worked and she has since tested negative for heartworms. Although she does have some damage to her lungs, it is closely monitored by the wonderful doctors here at Galloway!” 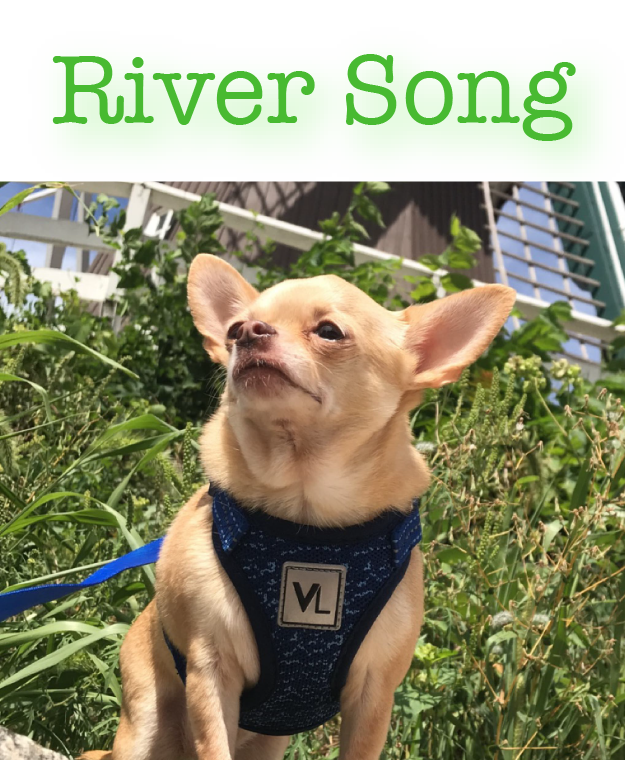 “When I got River Song, she was 10 weeks old and weighed 1.2 pounds. She came from a puppy mill and had a couple of defects and an upper respiratory infection that made her unable to be sold. I took her in and she turned out to be one tough girl! She never fails to make the people around her smile and has helped brighten the lives of the people she meets. As a chihuahua everyone expects her to be mean and vocal, but she’s as quiet and sweet as they come. I may have been the one to rescue her in the beginning, but she rescues me every day.” 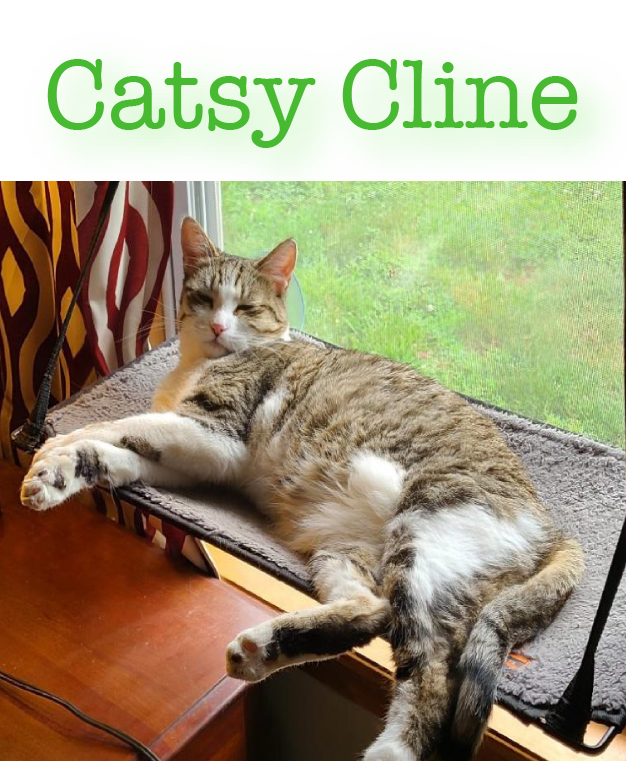 "This is Catsy Cline! She was a stray who wasn't fixed and had multiple litters. We took her in after she had at least her seventh litter. She had six kittens she was caring for. She had just recently had a litter a few weeks before and hadn't had a break which caused her to be severely dehydrated. We then found all the kittens home and got Catsy fixed. Due to being a stray all her life, she had severe ear infections that come and go and her teeth were completely rotted. After getting her a dental and getting her on the right diet, she is a super happy and loving girl now! Before she wouldn't let people touch her and now she is the sweetest girl! 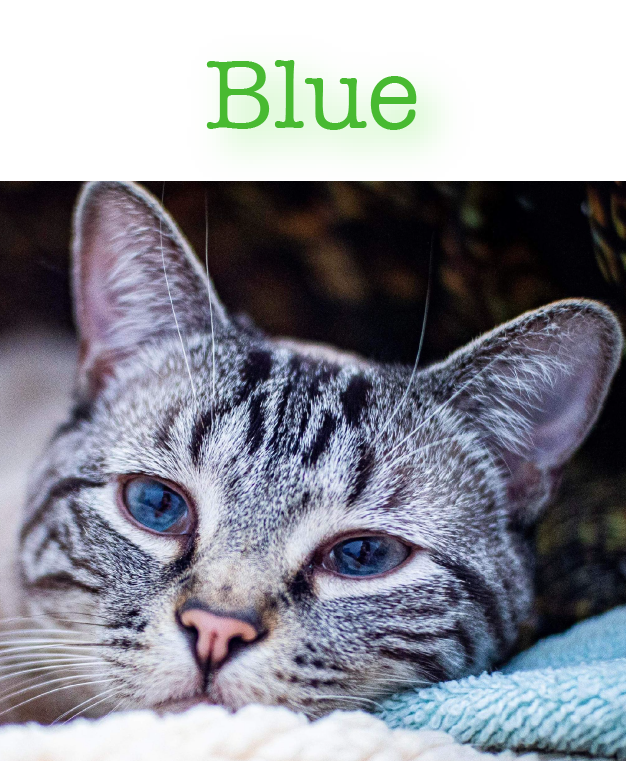 "I found Blue in July in the middle of the road under a bridge. I was in the car with my mom when I spotted him and yelled 'MOM STOP THE CAR!' because it looked like he was about to get run over! I got out and picked up the tiniest kitten. He was super weak and covered in fleas. I was in so much shock at this tiny cute kitten that I started crying and my mom knew I was instantly attached and couldn't let him go. We decided to keep him and bought all the necessities to take care of him. We took him home and gave him a nice bath and set up a little bed with a heater in it and he grew to be healthy! I don't think he would have made it much longer if I wasn't the one who found him and rescued him. We were both very lucky to find each other that day!" 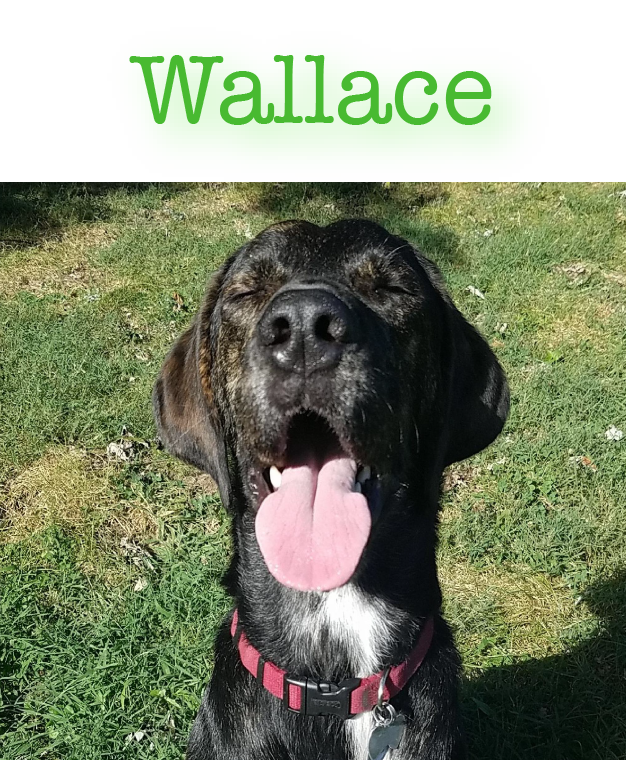 "My husband and I had moved into a house and were ready to adopt another dog. We wanted to adopt a dog with lower chances of getting adopted otherwise. We thought we could get an adult instead of a puppy, a large dog instead of a small dog, or a black dog as they are commonly overlooked in shelters. We found a boy that checked all three boxes - Wallace! As we came to know Wallace’s personality, we discovered how incredibly sweet and easy-going he really was. He got along with every person and animal he met (even our cat, guinea pigs, turtles, and tortoises). He bonded with our other dog immediately. He was up for any activity you presented him with (hiking, swimming, fetch, making friends at the dog park, you name it) or he was happy to sleep the day away on the couch. We felt like we had hit the jackpot with him. However, not too long after bringing him home, he started having seizures. We can’t say for sure, but this could be why he ended up in the shelter in the first place. He would have several seizures in a row and he wouldn’t have very many seizure-free days before he started having them again. After his first few seizures, he had bloodwork and x-rays, but they came back normal. We started him on anti-seizure medication, but he continued to have seizures frequently. We decided a trip to the University of Missouri was in order. While he was at the University, he had an MRI, an echocardiogram, and a spinal fluid tap to see if they could find a cause for his seizures. Fortunately, he was negative for any tumors or other possible serious causes. He was diagnosed with idiopathic epilepsy which means there is no known cause for his seizures. With that information we were able to start additional medication and, while he is still a work in progress, we are able to manage his epilepsy and help him live as happy a life as possible. Because we were so lucky to adopt one of the most easy-going dogs ever, he doesn’t seem to be phased by his condition. Within an hour of having an episode, he is right back to his happy-go-lucky self. Even though we didn’t know what we were getting ourselves into with him, we wouldn’t change our decision to adopt Wallace for the world!" 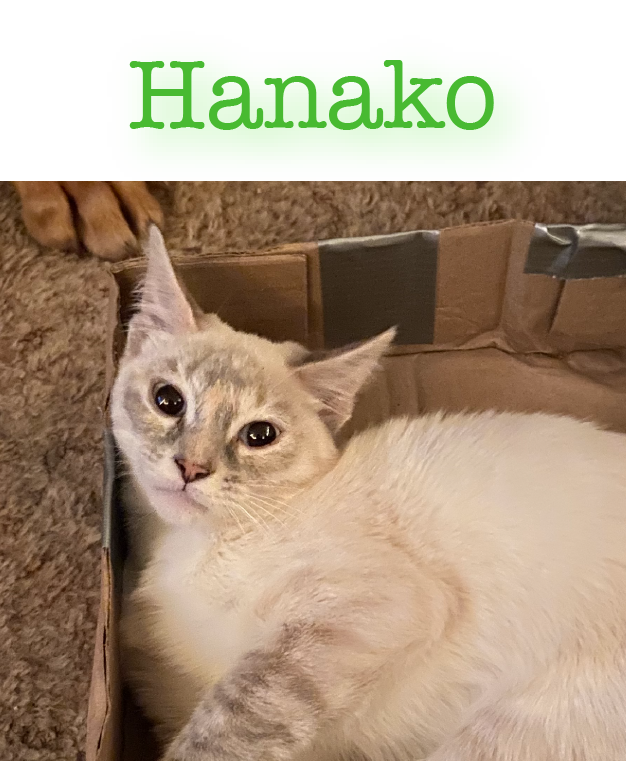 "Hanako is a very sweet and loving baby! She is eight months old and spent her first few months hospitalized. She had been born with an extra layer of skin over her nose and wasn't able to open her mouth. The doctors also had concerns about possible mobility or neurological issues. After a few weeks, she was allowed to go home but due to her being inbred she would always be anemic and malnourished. The owner at that time contacted me and asked if I could take her since they already had multiple cats in the home and none of them were fixed. I went to go meet her and see what I could do and the moment I saw her I knew I wasn't leaving her there! I am so lucky I was able to rescue her and give her the love she deserves!"

Whether your pet has a "lucky" story or not, they certainly bring you happiness and luck every day.

This is just a sample…

Your submission has successfully been sent. A copy of the message has been sent to the email you have used in the form.

Your submission failed because you have not completed all required field.

Form is being processed...

Your submission failed because you provided an incorrect email.

Your submission has failed because there is currently no mailing set to enter you details.